- March 22, 2020
The depth always remains a mystery. An edge high above holding beauty in a precarious cradle. Mercurial Horizon exemplifies these aspects. A line separating energy rushing towards us and the unknown expanse on the far side. Two qualities of feelings or emotions presented in proverbial stereo, one landscape revealing itself directly in front. A darkness surrounds these harmonies, with radiant beams of burning tonal particles slicing through in unrecognizable patterns. These thoughts revolving around a ponderous weight of true loneliness. An aural journey with a single conscious in the emptiness.

Matt Shoemaker has composed an hour of sound divided between two tracks. The titles simply Mercurial Horizon One and Two. The composition begins with a reflection of sounds from distant celestial objects. Like a mildly disturbed asteroid belt, rotating masses slowly spinning, then gently colliding with both smaller and larger brothers. These movements creating dark shadows brilliantly pierced by solar rays, menacing photons screeching through drifting debris. Sounds are in constant flux, and at times seam orchestrated by beings of higher conscious. Somewhere in this desolate place life faintly calls out, a haunting sound both warped and disguised by the surrounding clatter of constant motion.

The second half of the composition, if Mercurial Horizon should be considered as two parts, is even more forlorn. Sounds dispersing with cries of anguish, their fate lies beyond what is currently understood. Sonic brush strokes transcending through a dimensional rift. The process weighted down by heavy droplets of molecular liquid. A surge of other worldly energy goes unnoticed as it seeps into thoughts. These sounds are what lurk just beyond our imagination. Then Matt Shoemaker's world becomes quietly subtle. A slow moving ambience creeping into consciousnesses, a deserved heaviness for all of the creations that have come before. And finally, a cacophonous end combining features of the whole.

Released in the middle of February by Elevator Bath. As noted on the bandcamp description, this work was created approximately ten years ago, then finalized in 2015. This is a compact disc release in an edition of two hundred. Matt Shoemaker has previous compositions on Elevator Bath. The last, a completely sold out cassette released five years ago titled Flight | Chromatic Splitting Injunction. 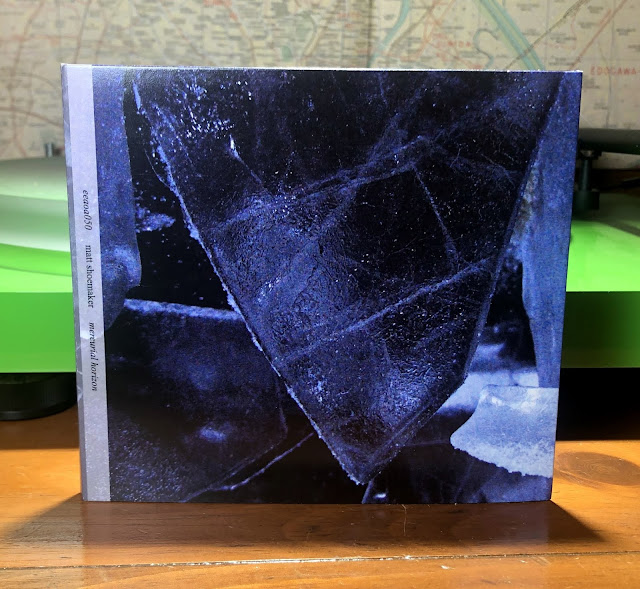