Showing posts from April, 2015
Show all

Be My Friend in Exile - Creator, You Destroy Me 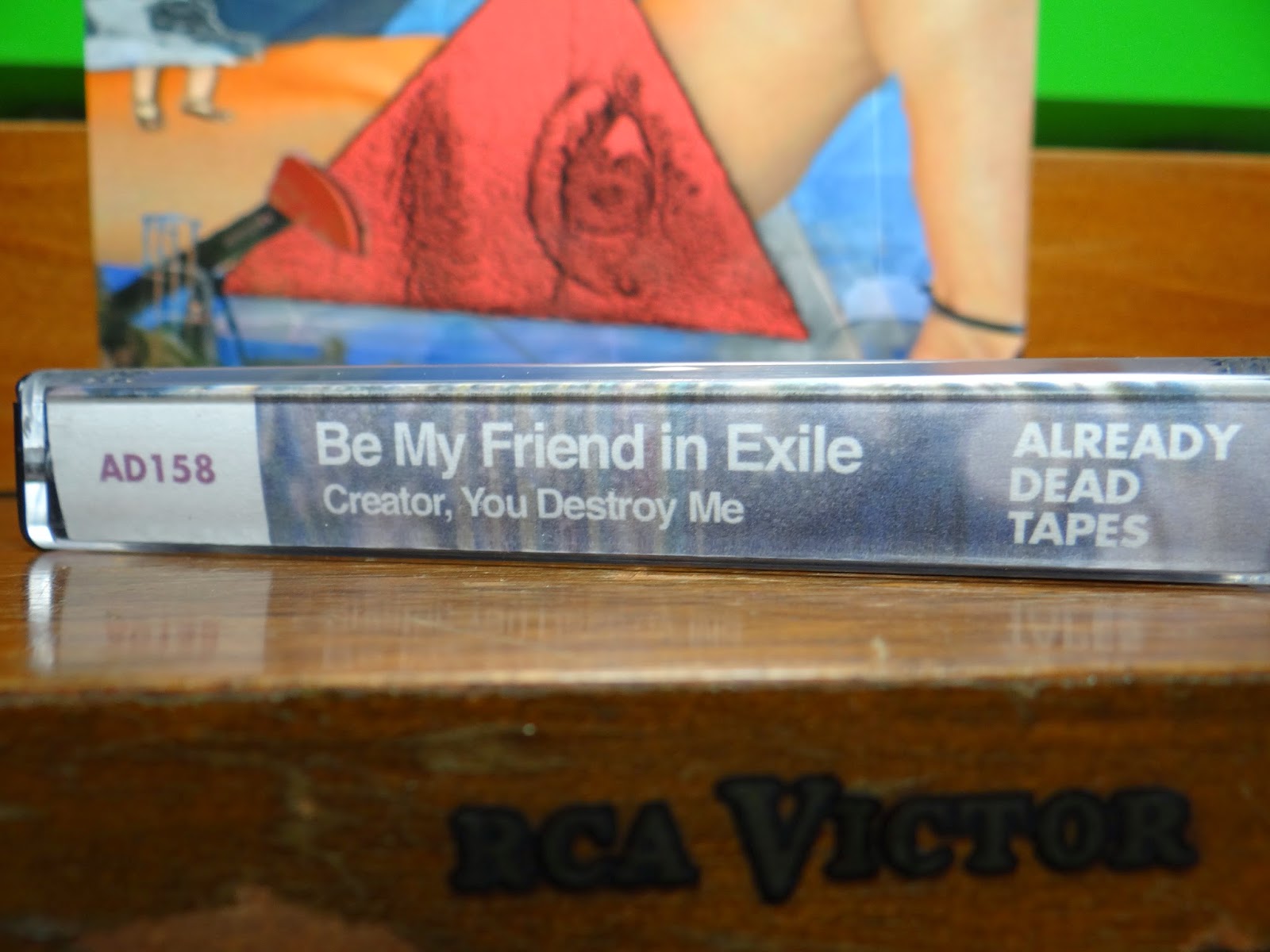 Sometimes when listening to music, sound burrows deep. Like an underground flow of water only heard through modern instrumentation. The knowledge to detect this flow without electronics has been almost lost entirely. The cassette titled Creator, You Destroy Me reaches through time and uses this forgotten wisdom to relay the underground current of music that exists within each of us. How this is achieved is still mysterious and unknowable by the listener. Be My Friend in Exile is Miguel Gomes. This is his roughly forty five minute sojourn into a world existing off all radar. Sounds here seem to echo in vast chambers. Electric guitar cracks, shedding brief moments of illumination then fades away returning to drone beneath the earth. Voices can be heard resembling the sparingly dripping stalactites protruding from the cavernous heights. This path was carved away by dense molecules, now hollow chambers for sound to travel. A listening journey through an opaque world of drone. As ears a
Explore Sounds »

Rural Carrier - Image of an Other 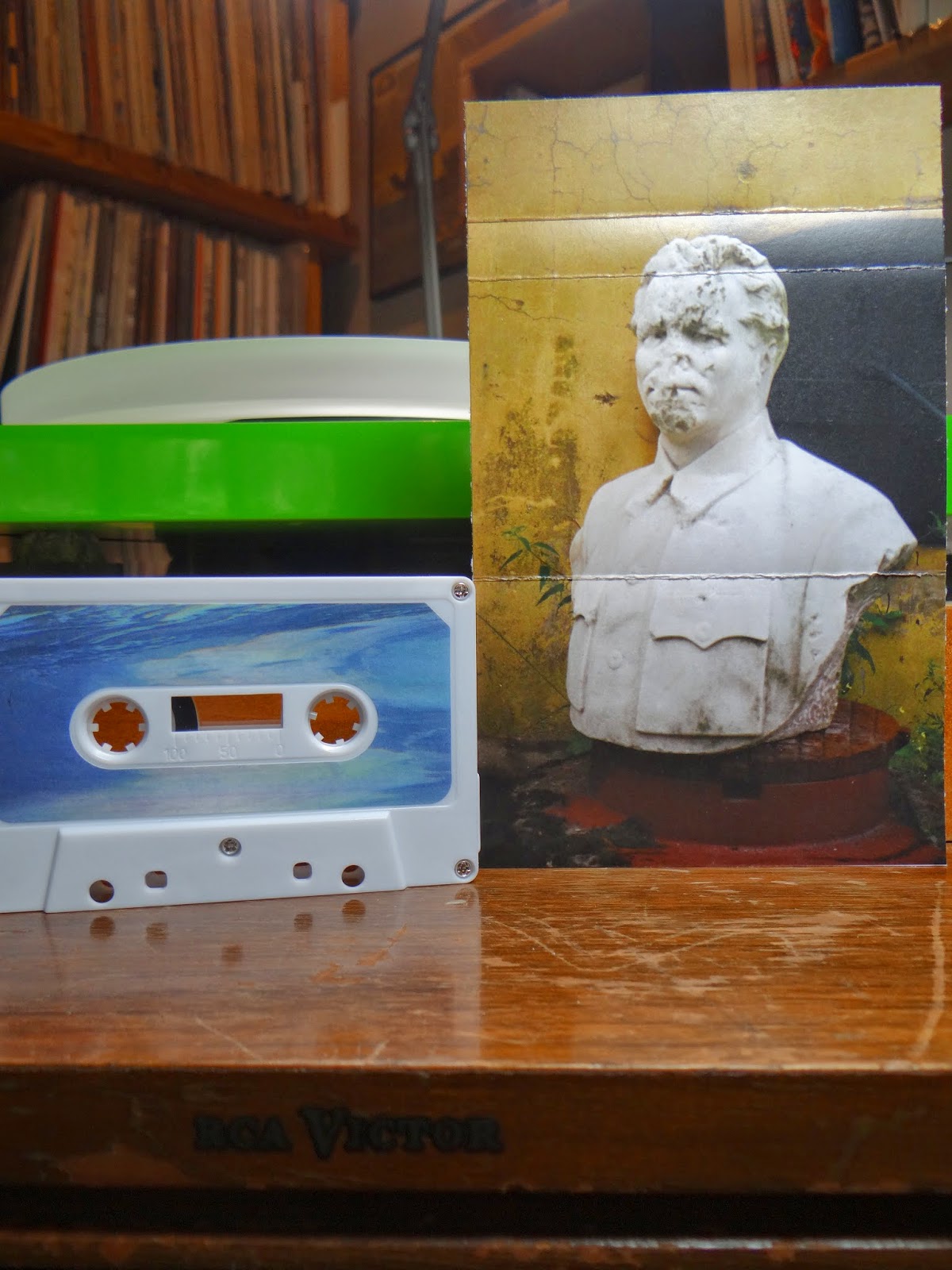 Blurred music from the minds of Jacob Koestler and Josh Russo. I have been listening to the cassette on repeat for the entire weekend. There was one point i felt a grip for description was in hand, but has eluded me once again. Six tracks over a period of twenty minutes take you to all sides of this hexagonal journey. In order to call forth words, Image of an Other must be examined by listening to the tracks creating it. Pressing play brings "White Winter" to your ears. Drone mixed with a futuristic mechanical siren, Ulysses has yet to hear. Complex in the sense of being both alluring and frightful simultaneously. The entire pallet shifts with "Shadow of Our Plane". This track throws my ears back to eighties music. Dark vocals with rhythm delivering late night adventure into a changing musical world. The third track "Heart of Stone" stops the listening continuum. Disjointed noises made by a new world of instruments. An automated voice repeating the w
Explore Sounds » 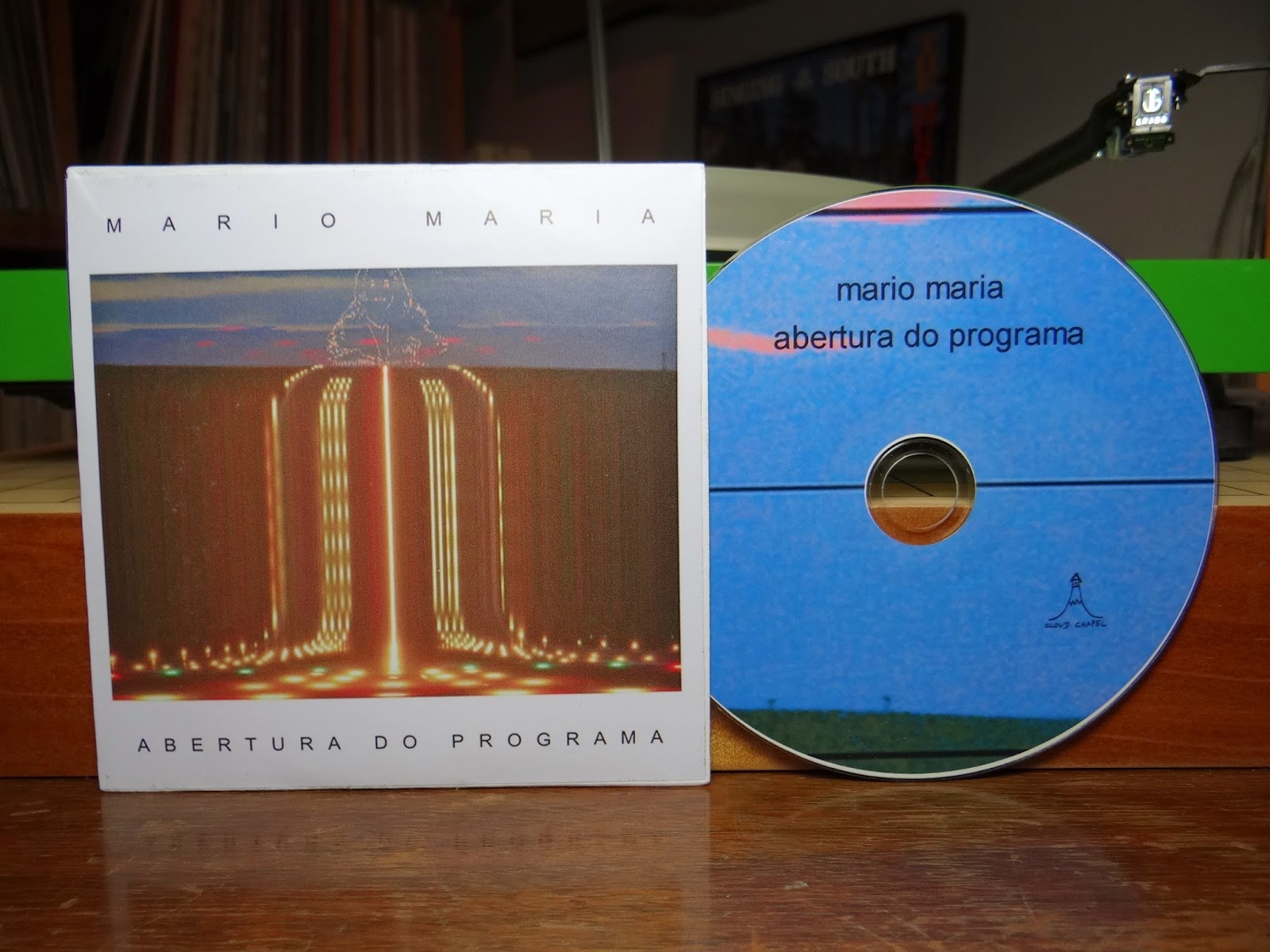 This is a composition you can really get lost in. Abertura Do Programa by Mario Maria is about twenty five minutes of ambient collage. There is an underground flow of allurement that passes through the ten tracks on this compact disc. Vocals are mixed with vintage samples from a bustling world. Nylon stings of a classical guitar are heard and take you to the southern hemisphere. As the listener drifts through this album, the journey takes root in a seldom heard macrocosm of the composers consciousness. Antipodally originating from the microcosm of the stations on earth we all reside. This collection of tracks makes me imagine late nights in the summer. Walking city streets and hearing the inner most sounds of the neighborhood. With the next block the sound changes, something else is happening. There is a consistency between blocks as if these residence are from long lineages of cultural heritage. Sounds are sentimental, textural, jumbled with each other. Clarity is heard then disappe
Explore Sounds » 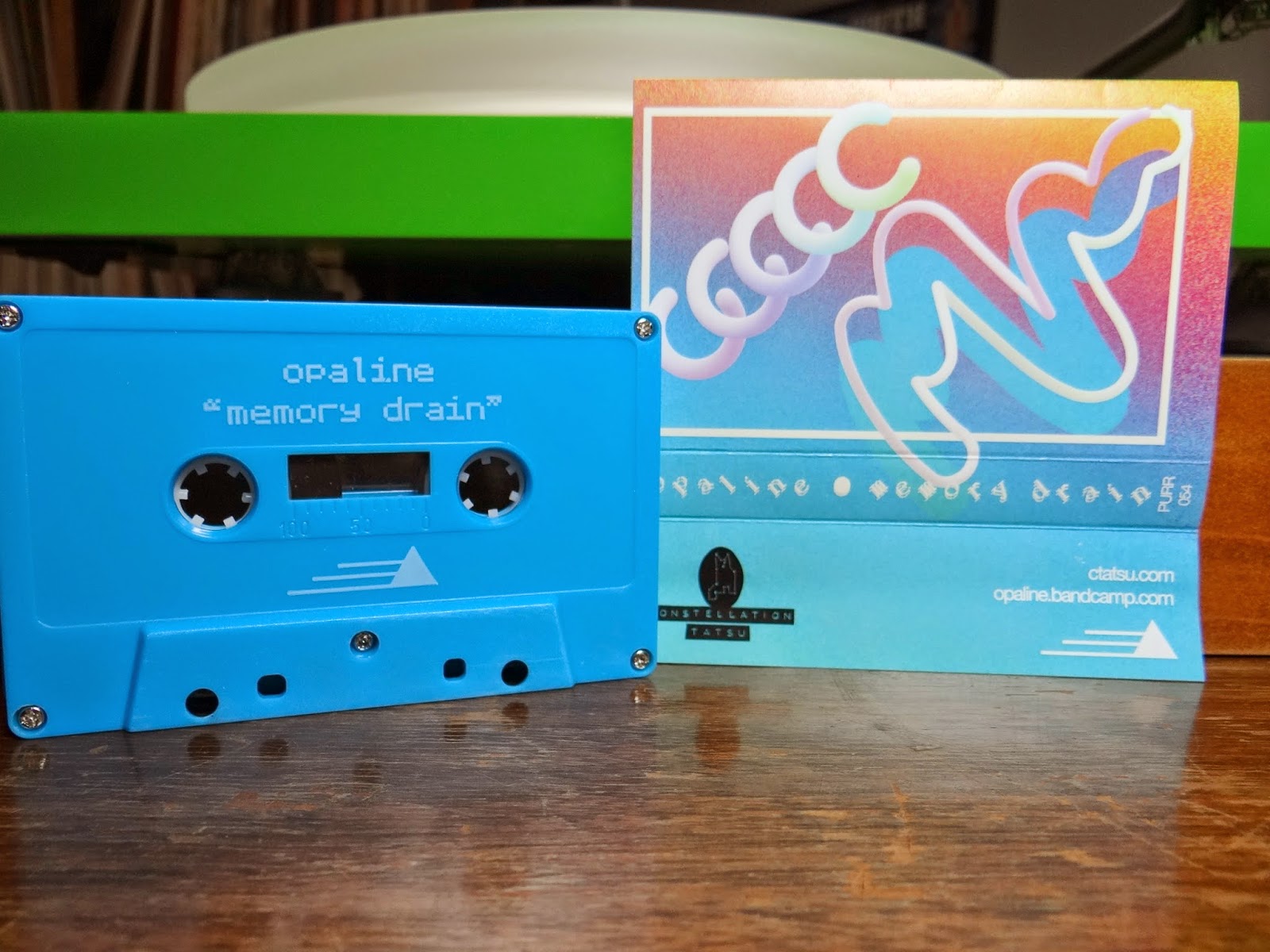 Memory Drain by Opaline is one of the their most recent cassettes arriving in a flurry of 2014-2015 releases. I went back and jotted down the discography from last year to present. Spatial Awareness on Psychic Troubles - March 2015 Memory Drain on Constellation Tatsu - February 2105 Project Mapping on Phinery - September 2014 Shade Virtual on Habitat Tapes - September 2014 Night Sounds Volume I - Self Produced - August 2014 Quixotic - Self Produced - March 2014 The amazing fact is everything is sold out from the respective label except for the most recent release on Psychic Troubles. The Constellation Tatsu release titled Memory Drain is what i have in the cassette player right now. This release maintains the quickened pace of synthesizer in overdrive. There feels like an added layer of sonic depth creating the ability to hear further into the microscopic world of data transmission. From the opening track titled Collider, this half hour plus of music provides little re
Explore Sounds » 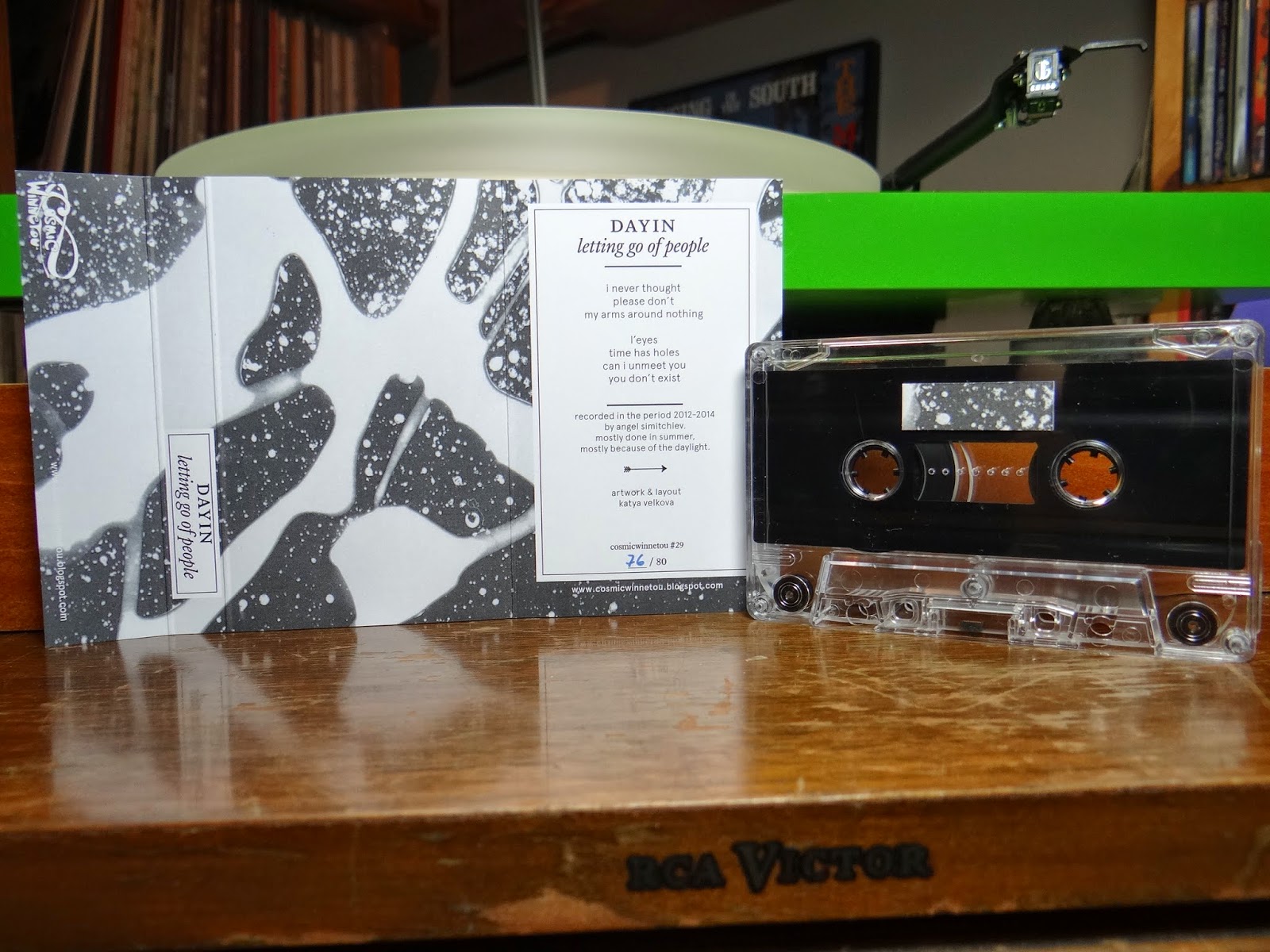 The gravity of sound is heavy with the new release from DAYIN titled letting go of people. The x-ray flux peaks sharply like a black hole with retrograde rotation. Time slows as we draw closer to the center. DAYIN keeps the listener transfixed with drone under pressure. The heaviness upon the ears causes the outside world to blur and cease to be realized. As the thirty plus minutes transpire, seven tracks command your complete audio presence. Back in another write up i mentioned three labels i would use for ambient/drone music, dark, neutral and bright. For this release, letting go of people, i would not necessarily throw it into the dark category. It is more like neutral with moments of both dark and bright. The sounds are massive, and tend to pin the ears down, but this is not accomplished by being harrowing. This takes place with density, a impenetrable wall of sound pushing you along. Because the tape has different tracks and the solidity of music changes, there are ample moments
Explore Sounds » 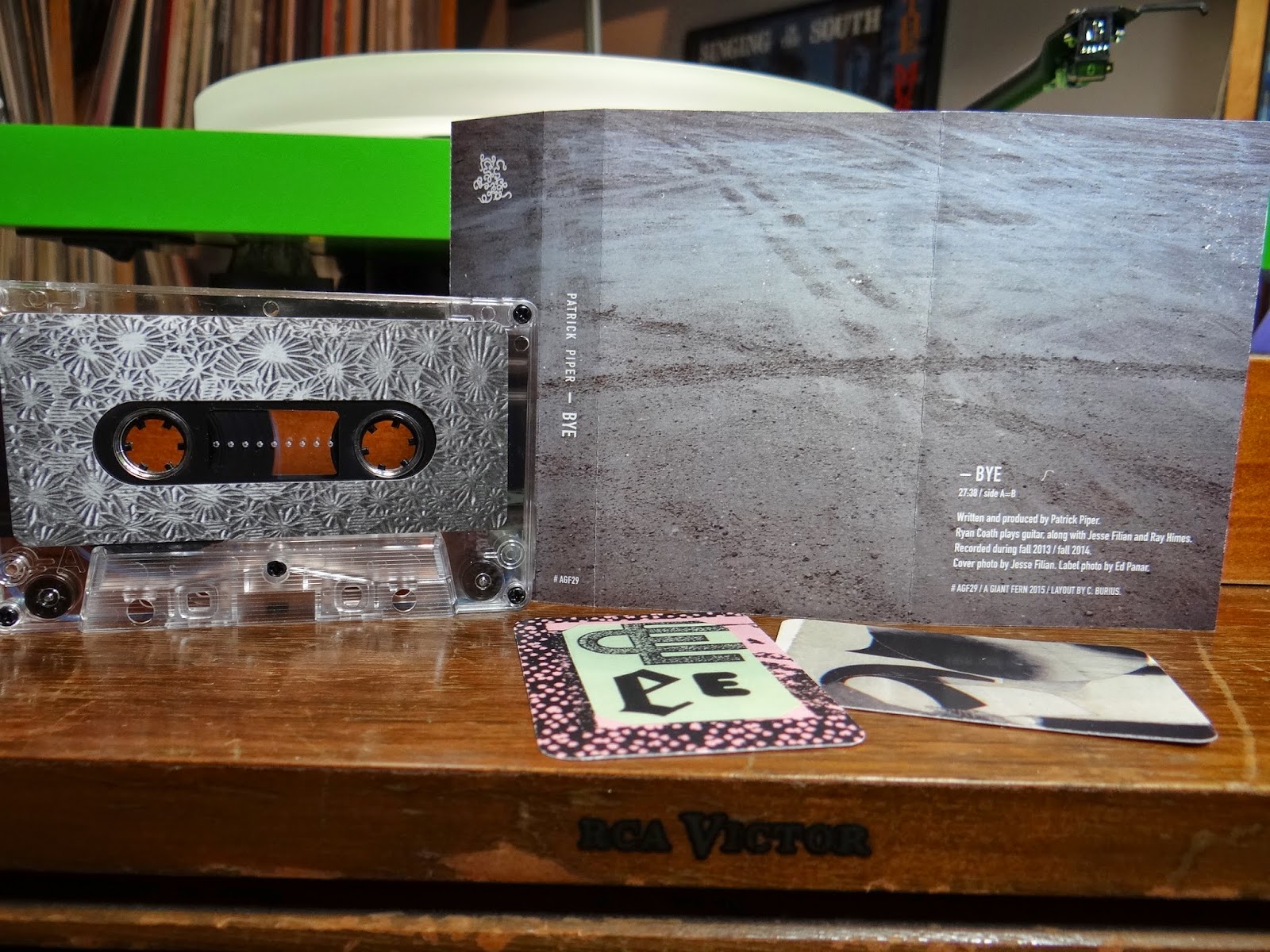 Have you ever read the Edgar Alan Poe story titled A Decent Into Maelstrom? As BYE begins, the wash of noise overwhelms the listener. This is similar to the old man in Poe's story describing his tale, he asks the listener: "and if you will creep round this crag, so as to get in its lee, and deaden the roar of the water, I will tell you a story that will convince you I ought to know something of the Moskoe-strom." As BYE reveals itself to the listener, i can not help but think of how the music fits with the grandeur of the whir pool and the survivor relaying his descent and escape to the listener. Both start with chaos and mystery only to subside and convey depth that will only be guessed upon. Patrick Piper is about a half hour story in sound. The world within these spools is immensely telling of skilled craftsmen and their visions. What starts as an eruption of electric noise gives way to beautiful notes refracting sound and creating the warm glow similar to a setti
Explore Sounds » 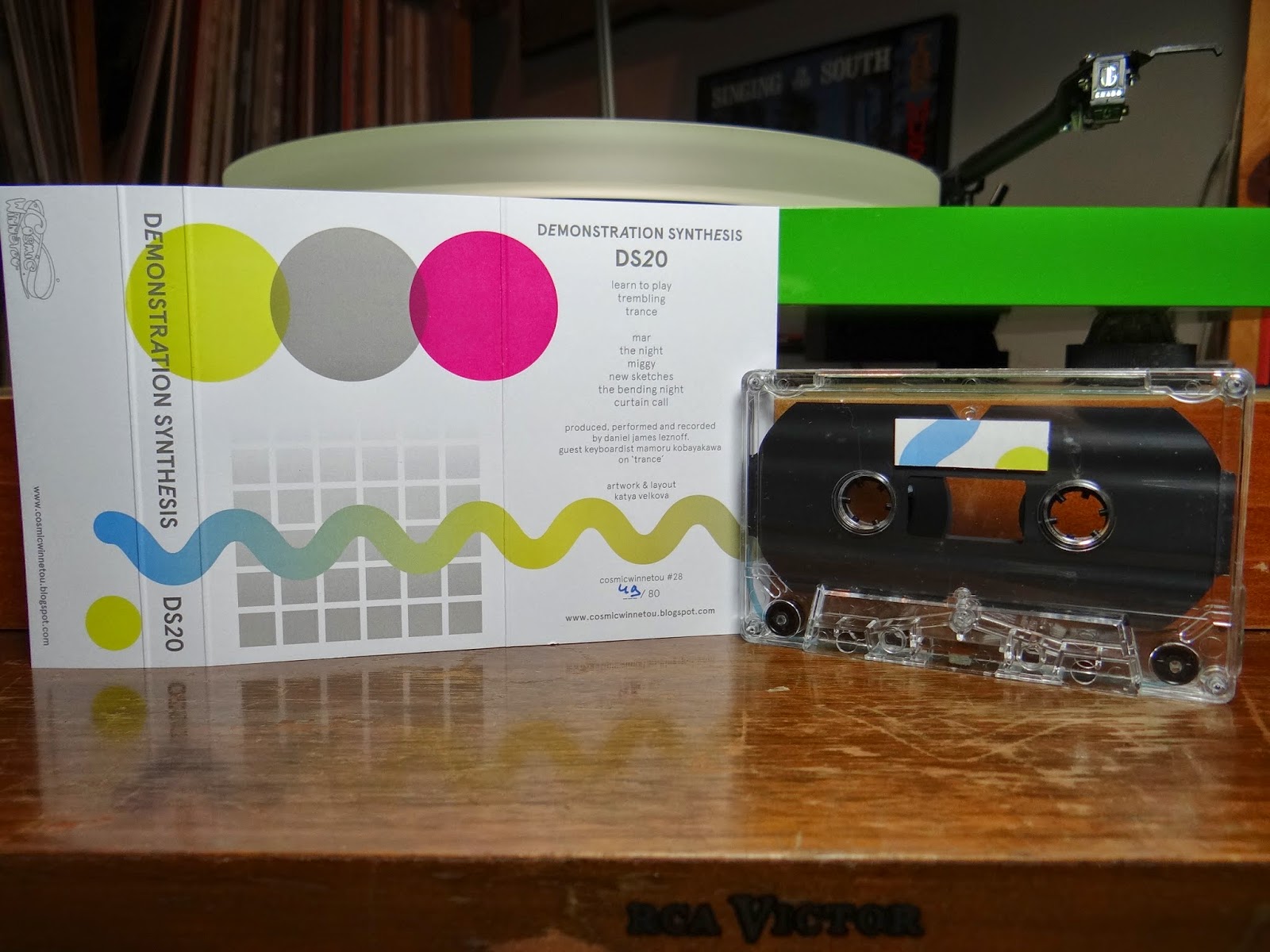 For the last year Demonstration Synthesis has been flying low to the earth and connecting with cassette label stations across the planet. The latest ping on the radar was in Germany at the Cosmic Winnetou base of operations. Information received and the cassette titled DS20 has been created. The 20 in the title is in accordance with how many Demonstration Synthesis tapes have been released in a little over a year. Daniel James Leznoff is the Montreal based helms person guiding this prolific project of incredible proportions. He has been and is a student, teacher, artist, composer and flickering mortal being. The Demonstration Synthesis project allows us to hear sonic output from Daniel's mind. As the light renews itself each day, i am sure this abounding project will transmute into different sparkeling brillance. At this moment DS20 captures listeners attention with nine tracks over thirty five minutes. The instrumentation is simple, keyboard synthesizer. The music extends from
Explore Sounds » 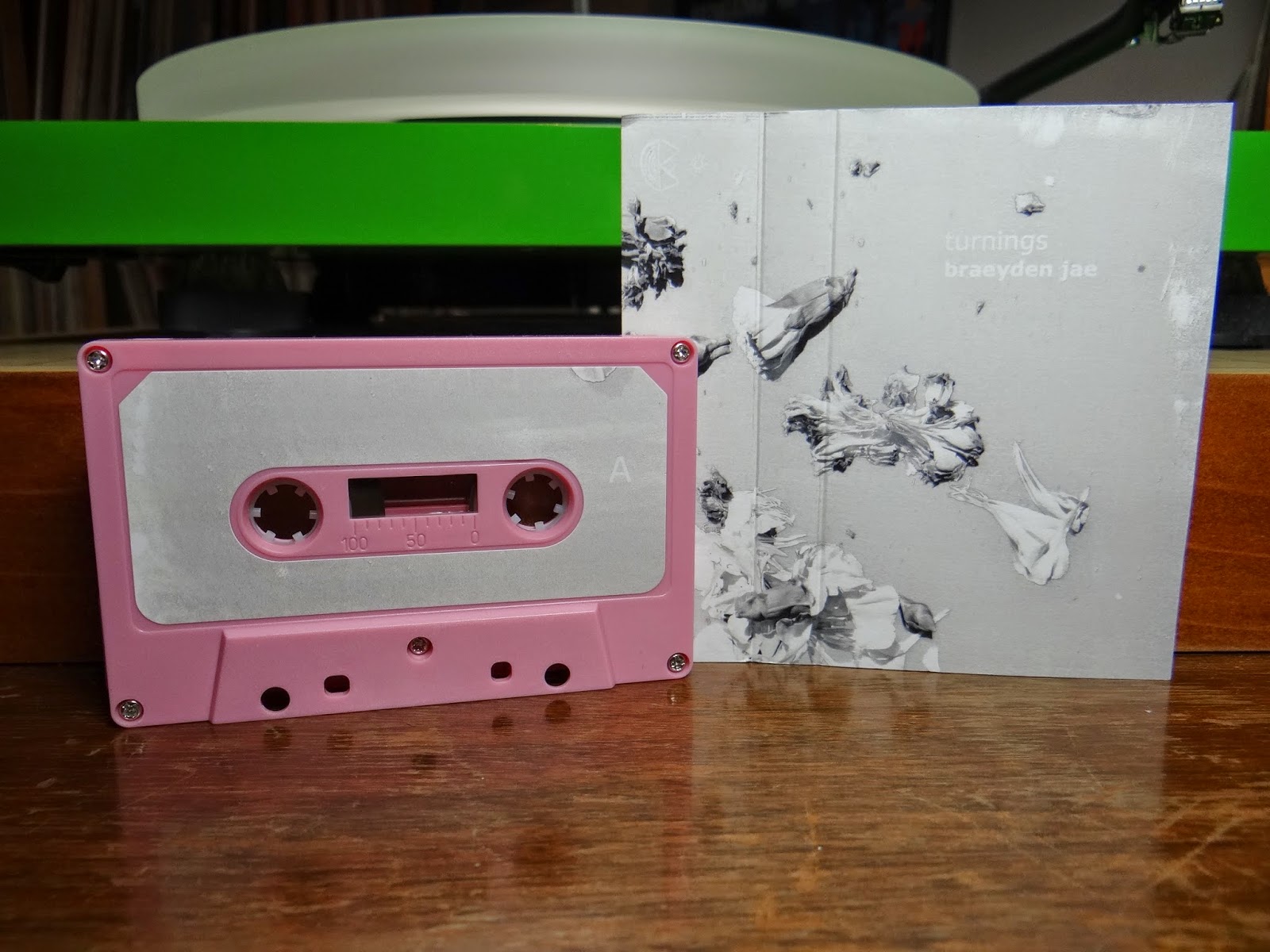 Creating music to tap into transcendental world of well being is a signature for Inner Islands. Braeyden Jae's new cassette Turnings follows this path using dense electronic harmonics. I am sure Braeyden knows what Inner Islands' is all about since he was the label founder. His style of composition has similar tone and feel with three other cassettes he has released over the last few years. Turnings is the closest to the light while his Hel Audio , Spring Break Tapes & Patient Sounds releases take paths deeper into the earth. With ten tracks over a half hour, the churning electronic world changes and mutates throughout the listen. There is very nice cohesiveness between pieces. Drifting then suspended, the music lets you go and gently guides you simultaneously. Sometimes the guitar sustains itself in clarity, the sounds become crisp and the moment is simple and beautiful. As the tone become more opaque, the listener finds himself behind the waterfall. The beauty exists b
Explore Sounds » 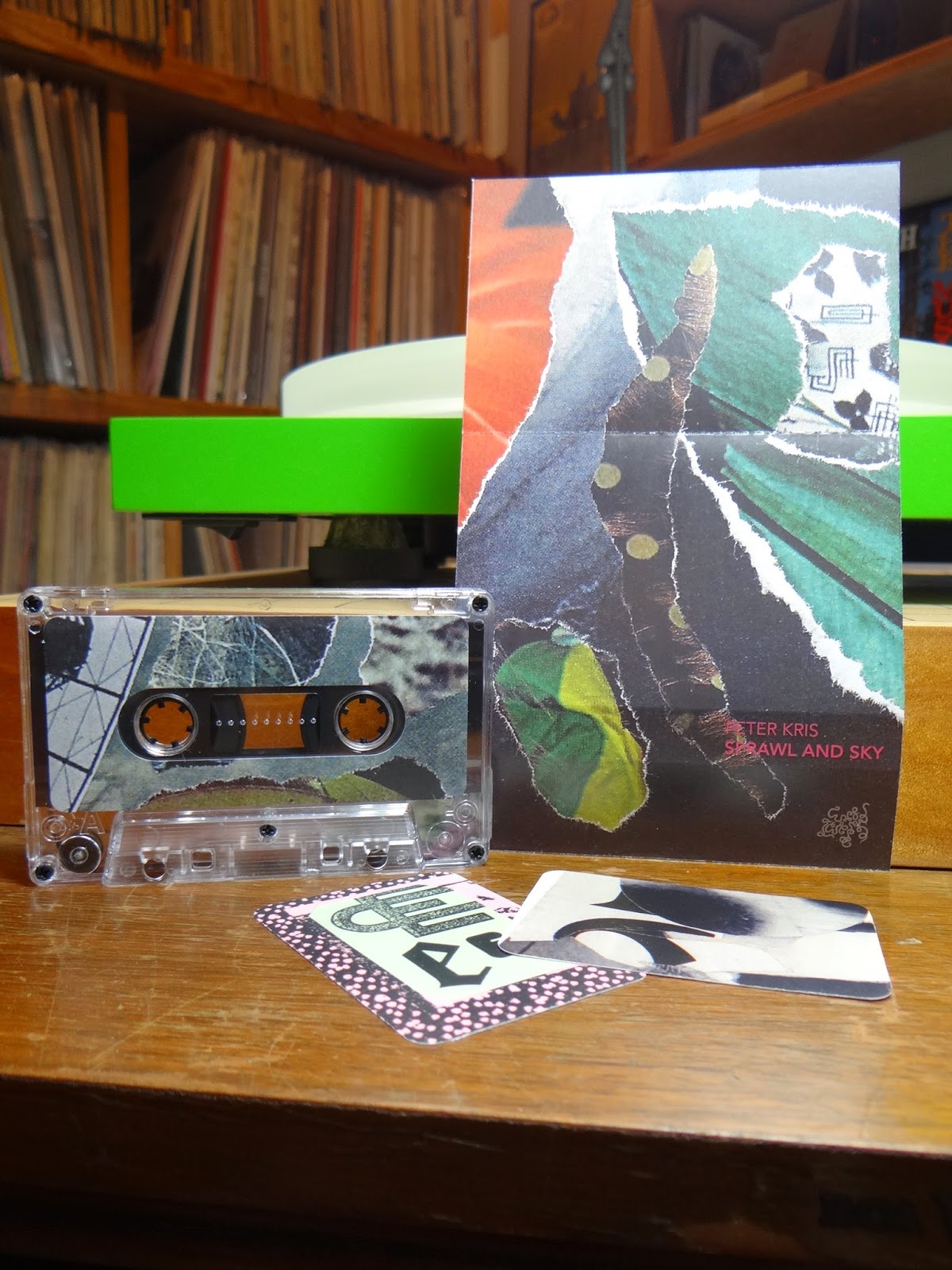 Everyone is so far along. Peter Kris is even more distant. Completely changing the mood, Peter Kris' new cassette Sprawl And Sky is a composition from boundless experience. As part of German Army, you would be half right or wrong expecting a solo tape to be more extreme or more subdued. Sprawl And Sky follows the direction of the later to a good degree. The most outstanding feature of this cassette is the texture Peter Kris evokes. The sounds are interwoven creating a sonic canvas somewhat jagged at times, but overlaid on a foundation of musical beauty. I noted this new listening accessibility in a previous write up for German Army - Social Catalyst on Jozik Records. There is a similarity between these two releases with Sprawl And Sky even more reeled in. As the cassette moves through it's eleven tracks the listener can relish in the patience Peter Kris has gained with creating so much music. There is a sense of delight from the sound waves being generated by my speakers.
Explore Sounds »

Channelers - They are Cloaked in Stars and Rivers 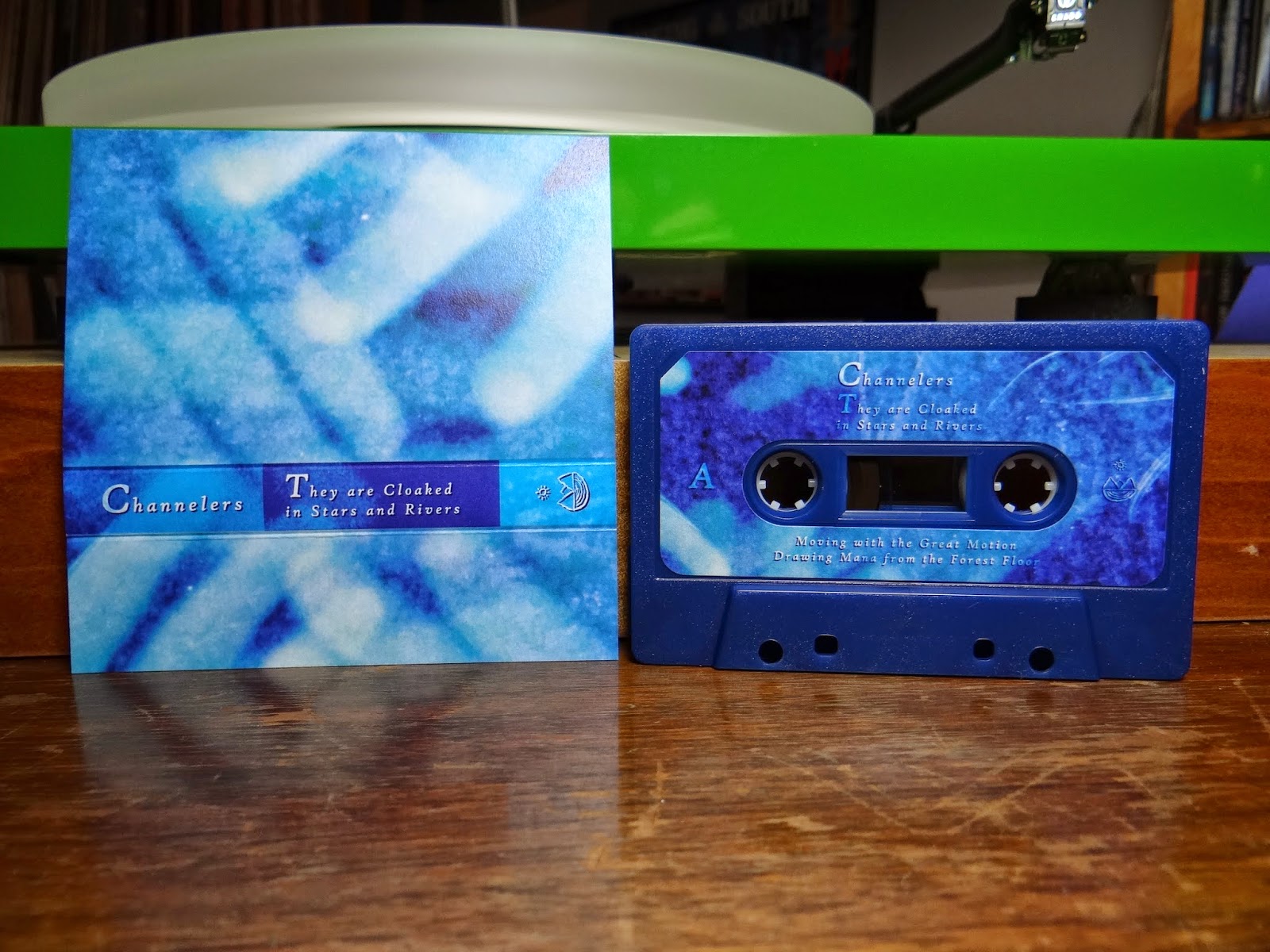 The Inner Islands label continues to release beautiful sounds in accordance to the ceremonial beat within Channelers, one in the newest batch. They are Cloaked in Stars and Rivers is over a half hour of brilliant ancestral tunes, emanating deep within the pine needle laden floored forest. The simple grandeur of the four tracks are played in deference to the energy and ancientness of the surrounding verdure. The genre of music created by Channelers is unclassifiable for me. I can summarize the feeling the cassette imparts upon the listener; a sense of well being. Each track is unique in it's composition and all of the tracks are cohesive together. There is no testing of your listening patience on They are Cloaked in Stars and Rivers. This is entirely refreshing when stacked with the multitude of harrowing sounds being created today, proving grounds of how far we are willing to traverse into despair. Channelers is on the majestic high plateau, sparkling with exquisiteness, guidin
Explore Sounds » 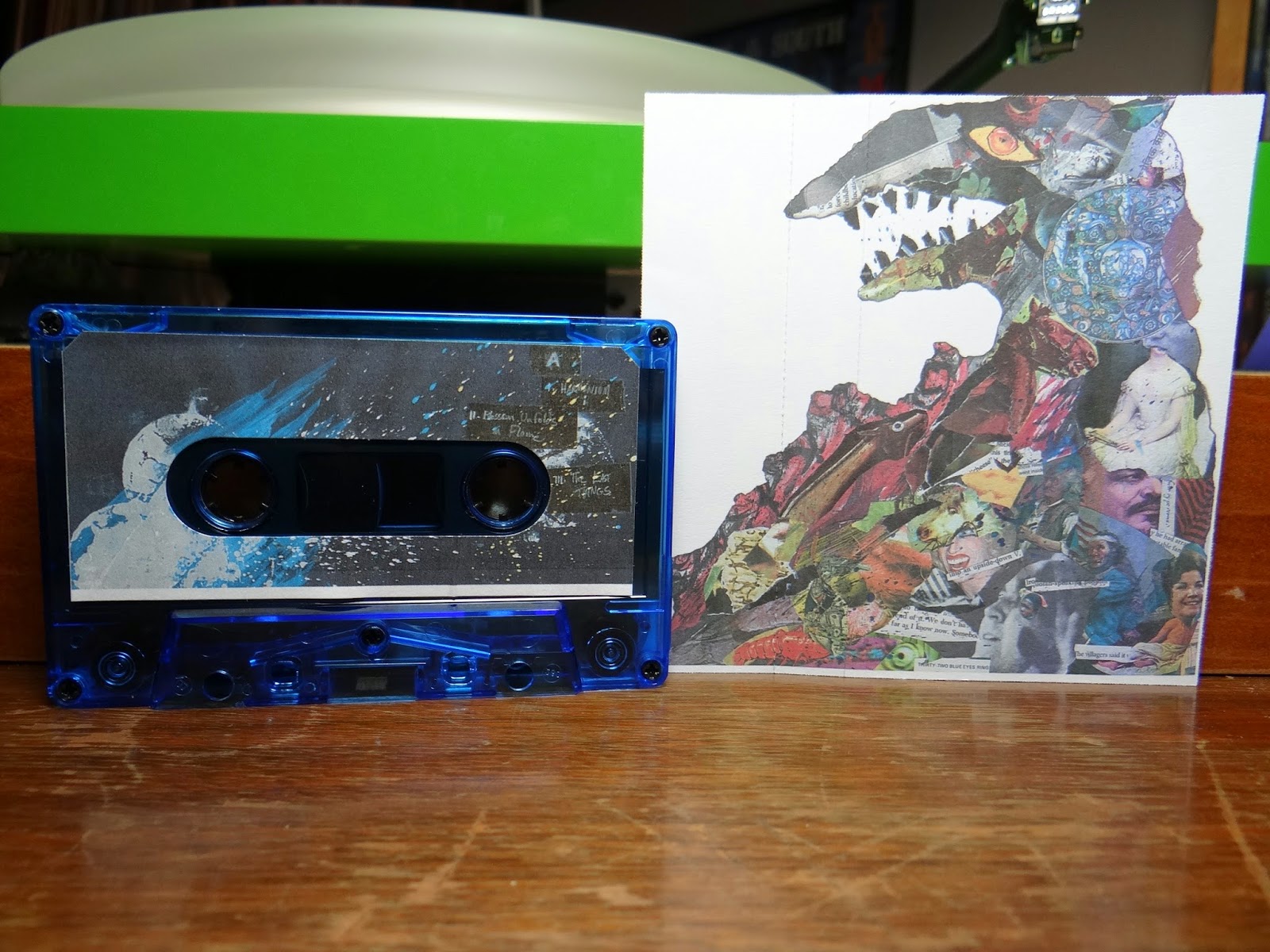 This is my second write for the underground Tennessee label Meliphonic Records. Unlike the first , Graceless is a bottomless sound journey into a pressure heavy world of drone. Matt Johnson and Joseph Allred are the components making up Graceless and Mare is the world they lead you through. Mare is a lengthy exposure to somewhat haunting impressions clocking in at over eighty minutes. The beginning is simply played harmonium with an even more straightforward titled track "Harmonium i". The sound here prepares the listener for the journey by setting atmosphere. The descent begins with "Blossom Unfolds In Flame", over fifteen minutes of cliff falling blurred white noise. Slowing at times to hear the new reality before reaching bottom with "The Last Things". This track really depicts in sound the core of a magnetic planet, the source emitting the aurora for the atmosphere above. "Hungry Ghosts" continues the melt down to the point of becoming mor
Explore Sounds »
More posts
lost in a sea of sound